There's thing quote that floats around the loss support groups that I'm a part of that I find myself thinking about all of the time. 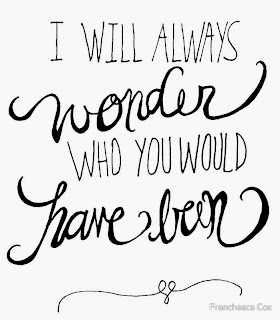 I wonder all of the time who Wylie would have been. She had her daddy's crazy black curls and sometimes I can just picture the mess that they would have been when she was a teenager. I can envision so many fits and fights over that hair. I wonder if she'd be like her mom and keep it up and messy always, a mess of curls belonging to a little girl as sweet and simultaneously as feisty as her brother. Sometimes I imagine them having similar personalities: earthy and deep sentimental and sweet, opinionated and bold. Ethan is a lot like me in his quest for whimsy and art and pops of color and brightness but he still has a handful of his daddy's realism. I imagine Wylie having been the same way.

Before having kids I would always joke that one of my kids would be singers. My grandmother, my mother's mother, was a singer. She was a singer that would have made it big if not for the tragedies surrounding her personal life, economic depression and the passing of her parents. She sang well into her struggle with Alzheimer's. Her voice was the last thing that went. My husband is a musician, too, who taught himself to play bass and guitar and always surprises me by how much he can in fact carry a tune. I always wanted to be a musician or a singer but I'm terribly tone deaf. I would always joke that after generation after generation carrying on the family's tone deafness, how nice it would be to have someone who could sing. When I was pregnant with Ethan I would joke that I sensed he was a musician and one day he would have a sibling who would sing and they'd form some pretentious and hip indie rock duo and I'd cry at all of their shows. Ethan seems to have inherited his daddy's love for music. He loves to play and wants to learn how to play every instrument he comes across. I think of that now and wonder if maybe she would have been the singer that indie rock duet. As silly as that sounds, sometimes it keeps me up at night to think about.

I wonder -- if only her heart wasn't broken, if only it was whole, if only she was healthy and okay and alive -- who would she have been? What great things would she have done? What would it be like to watch her waltz across the stage at a high school graduation?

But these are things you will never have answers to. You will have dreams and wonder -- but that's all you'll have. Because your children will forever be the age they were when they passed. Wylie will be an infant forever and those wonders, those dreams -- that's all they'll ever be.